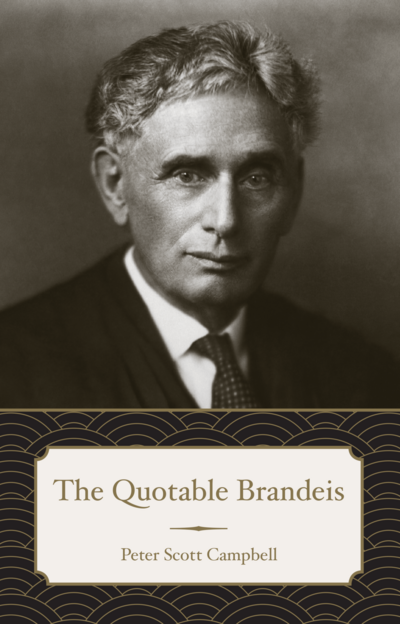 The Quotable Brandeis has three purposes. The first is to gather together Brandeis's quotes, both famous and obscure, in a subject-related order. The researcher or writer should be able to use this book to find something written by Brandeis that will bolster (or challenge) their viewpoint. The range of quotes here is far greater than what can be found on the Internet, and they are more accurate, since they have been taken directly from the original sources. These sources include not only his most famous writings, but also letters, newspaper and magazine articles, and reminiscences written by other people.

Another aim of this book is to provide accurate information for the source of the quotes. As ubiquitous as many of Brandeis's quotes are, they are rarely accompanied by citations, thus making it difficult for many writers to include them in their articles. The citations will also assist researchers who want to read the quotes in their original context so that they can get the full meaning of what Brandeis was trying to say.

Finally, there are a number of quotes on the Internet and in the public sphere that are misattributed to Brandeis. Some are "Brandeisian" in nature, while others have little to do with Brandeis's actual philosophy. All of the fake quotes that are included here in the last chapter have been attributed to Brandeis so often that his authorship of them has become accepted as a matter of fact. This book attempts to set the matter straight, not only by stripping Brandeis's name from them, but also by tracking down the actual authors when possible.

This book is part of the Legal History Series, edited by H. Jefferson Powell, Duke University School of Law.