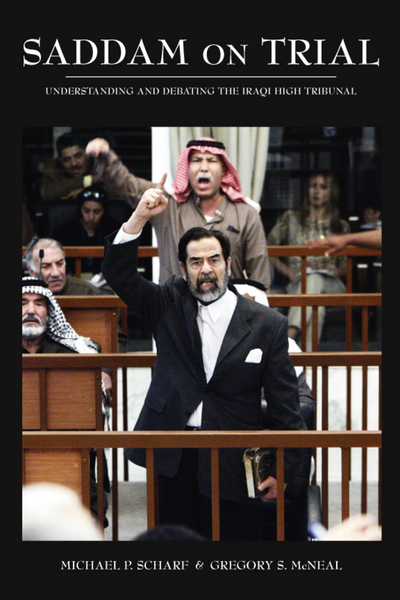 Saddam Hussein. Derided as "the Butcher of Baghdad," he was charged with the most serious crimes known to mankind. On October 19, 2005, the ruthless Iraqi leader and seven of his henchmen began a legal battle of epic proportions, with their lives literally in the balance. The first of several planned trials before the Iraqi High Tribunal focused on the destruction of the town of Dujail and the torture and murder of its inhabitants in retaliation for a 1982 failed assassination attempt.

Billed by the international media as "the real trial of the century," the televised proceedings were punctuated by gripping testimony of atrocities, controversial judicial rulings, assassinations of defense counsel, resignation of judges, scathing outbursts, allegations of mistreatment, hunger strikes, and even underwear appearances.

Was it a mistake to try Saddam in Baghdad before a panel of Iraqi judges? Was the Iraqi High Tribunal a legitimate judicial institution? Were the proceedings fundamentally fair? Did the judges react properly to the defendants' attempts to derail the proceedings? Did the Prosecution prove its case? Did Saddam have any valid defenses? What precedents did this extraordinary trial set?

Saddam on Trial: Understanding and Debating the Iraqi High Tribunal provides the reader with a thorough understanding of these and a host of other issues related to the Saddam Trial. The text offers a series of essays, in which leading international and criminal law experts discuss and debate more than thirty discrete questions raised by the trial. The book also includes a psychological profile of Saddam Hussein, a chronology of events related to the charges, a glossary of key legal terms, a synopsis of the charges and applicable law, a summary of the evidence and testimony, an analysis of the judgment, and English translations of the Tribunal's Statute, Rules, and other relevant instruments.

Saddam on Trial is designed for law students, undergraduates, academics, journalists, and general readers. The book will be useful as a supplement for any law school course on International Law, International Criminal Law, International Humanitarian Law, or National Security Law. It is also suitable for undergraduate Foreign Relations, Public Policy, or Criminal Justice courses. An accompanying Teacher's Guide contains suggested questions and answers, debates, simulations, and role play exercises designed to facilitate use of the book as a teaching tool.

"The expertise of the authors and the contributors (all specialists in the rarified world of international criminal tribunals and the broader fields of international human rights) ensured that the essays are uniformly well written, focused on important topics, and interesting." — Law & Politics Book Review