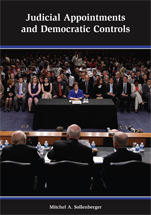 by Mitchel A. Sollenberger

The Constitution provides that the president "shall nominate, and by and with the advice and consent of the Senate, shall appoint" federal judges, but that language is not precise and leaves much to the imagination. At various points in time Congress and the president have battled over how to exercise joined responsibility in making judicial appointments. Some argue that the founding fathers would have found the increased tension between the branches in recent decades regrettable as it has led to political posturing and too great a focus on ideological concerns.

Sollenberger disagrees and believes that the framers' intentions are still well maintained in the modern judicial appointment process. He contends that Congress and the president have been guided by republican values and structural protections intended by the Constitution. These elements constitute the democratic controls that have helped the political branches give meaning to the Constitution by shaping the judicial appointment process. Changes over the years that have given elected officials greater ability to review judicial candidates' records and qualifications to office, Sollenberger argues, are well within the framework of the Constitution and meet the intent of the framers.

In presenting his thesis, Sollenberger delves into all stages of the judicial appointment process analyzing Congress's power to create and abolish offices, place qualifications on office holding, give advice and recommend candidates, and generally provide detailed scrutiny and review of all judicial nominations. Each chapter presents one part of the judicial appointment process analyzing its development overtime and showing how democratic controls have strengthened the overall system.

"This book will prove valuable in various academic environments. College faculty will want to consider it as an extremely readable choice for undergraduate classes in constitutional law, the system of checks and balances, or the inner workings of Congress. The text can also support law school seminars analyzing the judicial appointments process or the relationship between the president and Congress. Students at all levels will like the concise summaries that conclude each chapter." — Margaret H. McDermott, Head of Reference and Faculty Services, Saint Louis University Law Library