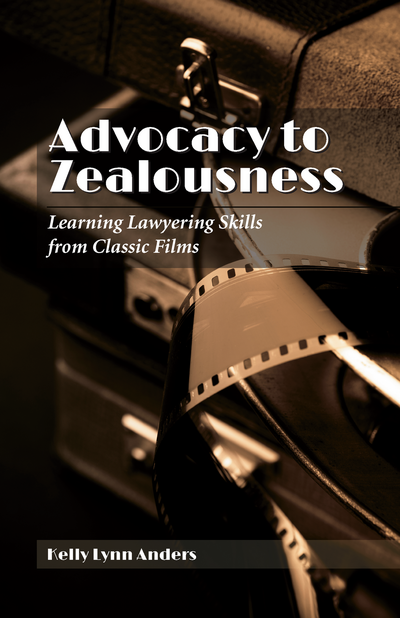 Advocacy to Zealousness: Learning Lawyering Skills from Classic Films includes 26 skills, listed in alphabetical order and appearing in separate chapters, which should ideally be in every lawyer's toolbox. Each is an example of professionalism, and all are possible for every current or future lawyer to attain or sharpen. They also speak to our needs in the legal profession in the new millennium. Interspersed throughout the text are subtle references to diversity, both in the practice of law, as well as in various film references and storylines.

Each chapter includes a discussion of the skill and its use for lawyers, a synopsis of the film associated with the skill, film discussion questions, and brief exercises for improvement. The format encourages readers to either methodically review each chapter in alphabetical order, or skip around as needs and interests dictate. The book concludes with a comprehensive index.

Images, be they positive or negative, are powerful and long lasting. Those found in popular films are often our only points of reference until we meet the real thing — or assume the role ourselves. Many professors already use film clips in their classes, but, until Advocacy to Zealousness, there was no singular point of reference for films selected solely for the purpose of fostering and sharpening lawyering skills. Legal skills training needn't be dry or cumbersome. With creativity and planning, it can instead be educational, memorable, and enjoyable — while also remaining comprehensive and relevant — thereby enhancing the practice of law and the legal profession as a whole.

Anders spent more than three years sharpening the list of lawyering skills, and she researched and analyzed 327 films to select the 26 that are included in the book. Every film selected was released before the adoption of the modern film rating system in 1968, which facilitates showing them in a variety of classroom settings because they lack the expletives, nudity, and graphic violence frequently found in modern films. Additionally, each film is available in DVD format, and most feature diverse characters in leading or supporting roles.

"That Kelly Lynn Anders employs film classics to teach (or reinforce) critical trial skills in her latest book, Advocacy to Zealousness, should not be surprising. Movies are just stories on film. But trial lawyers are typically the weavers of the story, not the intended audience. So when Anders deftly turns the tables by using cinematic storytelling as a tool, the result is both surprising and entertaining. While primarily written for law students and academics, this book is an enjoyable read for all lawyers, imparting knowledge to the novice and sharpening the skills of the seasoned practitioner. ...[T]he book's most useful feature is its list of "Exercises for Improvement" at the end of every chapter, offering concrete techniques for mastering each skill." — Kenneth J. Allen, Trial magazine (January 2013)

"Anders has…done a fine job selecting the films. Her descriptions are clear and the reader should be able to establish whether the film discussed is one that warrants attention and potential presentation to a class…. Some of the films selected, such as To Kill a Mockingbird, are among those typically selected for discussions about portrayals of lawyers in popular film, but many, such as Gentleman's Agreement, may offer refreshing material to those who teach a law and film class or who use films to animate classroom discussions." — J Thomas Parker, Law and Politics Book Review (Vol. 23 No. 1)

"Lawyers—particularly those who teach—look for innovative ways to present points they want to convey. Kelly Lynn Anders' new book invites thinking about new approaches to examining legal skills, as well as introduces many fine movies that might otherwise escape attention. ...Anders uses the films to illustrate skills she lists as important for one who aspires to be a lawyer: from advocacy to dependability to judgment to persuasion, and ultimately zealousness." — Raymond T. (Tom) Elligett, Jr., The Bencher (September/October 2012)

"While the book is tailored mainly for law students, it will appeal to lawyers as well. Bar associations might base a film discussion series on it. It would also make a welcome gift for law graduates or lawyers, who can enjoy reading the book from cover to cover or simply mining it for forgotten gems." — Judith D. Fischer, Bench & Bar (September 2012)

"It's a wonderful book that fits the concepts of the Carnegie Report in that it makes people consider the profession and self awareness side of the law. ...Anders has done a wonderful job of weaving together classic movies, issues that every lawyer faces, and a great historical view of these movies." — Mark Caldwell, Public Program Development and Resource Director for the National Institute for Trial Advocacy (NITA)

"This book provides resources that lawyers interested in developing professional skills or professors teaching skills and ethics courses could draw on. It appeals to classic film buffs and is particularly appropriate for any law school library that maintains a film collection. It could easily form the basis for a film series organized by a law school or legal education entity. While there are other books that talk about the appearance of legal topics and lawyers in movies, this appears to be a unique addition to the literature. ...A quick and enjoyable read, this book is recommended for collections focusing on practical lawyering skills and for professionals interested in approaching skills from a new perspective." — Kate Irwin-Smiler, AALL Spectrum Blog

"The film discussions are engaging and the discussion questions and exercises are interesting and thought-provoking—even if you don't implement them, they provide insight into the lawyering skills highlighted by this compact, readable, and entertaining guide." — Kathryn Bellman, The Nebraska Lawyer

"I definitely wish I had a law school class that used this book as a textbook." — Joshua H. Camson, The Lawyerist

"She whittled down the movies she watched to 26 that illustrate important skills for lawyers, though the skills are personal and professional characteristics that apply to everyone—balance, compassion, dependability, judgment, loyalty, sincerity, tact and willpower. The result is her A-to-Z book...[a]imed primarily at students and new lawyers, [it] also may appeal to screen aficionados. ...Few of us would plow through hundreds of films, but reading Anders' well-written essays on legal skills and her synopses of her final 26 made me want to rent them and, in many cases, see what I've missed." — Michael Kelly, Omaha World-Herald

"…a strongly recommended pick for those who want to understand the passion needed to succeed as a lawyer." — James A. Cox, The Midwest Book Review (Wisconsin Bookwatch)