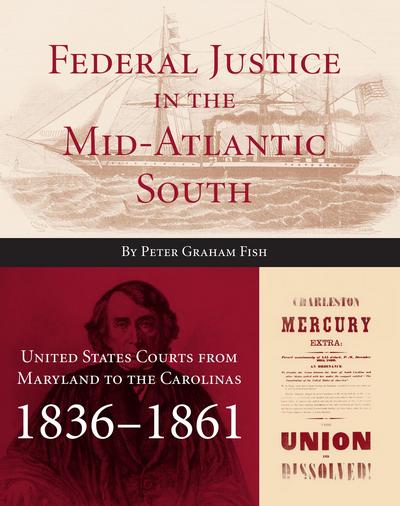 Federal Justice in the Mid-Atlantic South

United States Courts from Maryland to the Carolinas, 1836-1861

This sweeping exploration in eight richly illustrated parts meticulously traces the antebellum development and performance of the federal judiciary across five judicial districts and, until 1842, three separate circuits within the bounds of the modern but historic U. S. Fourth Circuit (Maryland, Virginia-West Virginia, and the Carolinas). A variety of sources, data, and approaches are used to explain the politics of circuit and court organization as well as the selection and disparate compensation of the district judges, court workloads, and administration.

Emphasis is placed on the roles played by the judges, including the circuit-riding Supreme Court justices, primarily James M. Wayne and Roger B. Taney, as well as advocates at the bar and grand juries in construing the constitutional powers and limits on the judiciary (i.e. "brown water" admiralty jurisdiction), Congress (i.e. international slave trade), and the executive branch (i.e. executive officers). Their decisions defined nation-state relations in a sometimes benign and sometimes confrontational states-centric polity, shepherding economic life in adjudicating litigation involving patents, diverse maritime interests including those of maritime labor, bankruptcy, transportation in the waning Age of Sail and the inception of steam power technology, contracts and conveyances, and a limited range of social control subjects from murder and mail robbery to the Atlantic slave trade and fugitive slaves.

Part 8 treats the twilight days of the Old Republic in each of the five judicial districts wherein the judges and court personnel faced hard choices for some and easy choices for others amid cascading political events heralding America's greatest constitutional crisis.

This book is part of the Legal History Series, edited by H. Jefferson Powell, Duke University School of Law.

"Federal Justice addresses an amazing array of issues, from biographies of influential personnel to courthouse architecture...The Fourth Circuit is fortunate to now be the subject of an excellent historythat spans the entire antebellum period. Fish's current work offers a fascinatinglook at the people and places that defined the federal court presence in the Mid-Atlantic South. Most impressive is the way his history demonstrates how legaldisputes over commercial matters, chiefly those related to the movement of goodsat sea, raised fundamental questions about the deepest purposes of government. Conflicts resolved in the federal courts demanded concrete applications ofboth national and local values. Professor Fish's account of those decisions giveshistorians novel and rewarding perspectives on American law, slavery, and theCivil War."
—James L. Hunt, North Carolina Historical Review

"A comprehensive, richly detailed history of the federal court system in Maryland, Virginia, and the Carolinas. . . Libraries that own the previous volume will definitely want to acquire this one to complete the set. Recommended for law libraries and for all collections with a focus on American legal history or the history of the mid-Atlantic region."
—D. Durant, East Carolina University, CHOICE Magazine

"Fish's mastery of the secondary literature on the federal courts in the antebellum era is impressive....The Carolina Academic Press's lavish presentation will be attractive to practitioners as well as scholars. Fish's Federal Justice on the Mid-Atlantic South: United States Courts from Maryland to the Carolinas, 1836-1861 is truly a remarkable achievement and sets a high standard for similar works on the nineteenth-century federal courts."
—James M. Denham, The Journal of Southern History

"Fish's book has to be among the most thorough examinations of federal courts in the antebellum South. For that reason alone, it belongs in all of the academic and law libraries of what Fish calls the mid-Atlantic South, and in libraries outside the region that want an example of how such an immensely challenging historical project can be done. . . Fish's aim is to provide researchers and anyone else who has an interest in the federal judiciary in the mid-Atlantic South during the twenty-five years before the Civil War with a single volume that provides an abundance of relevant and fascinating information. He has done a splendid job of achieving that goal."
—Nick Sexton, Law Library Journal