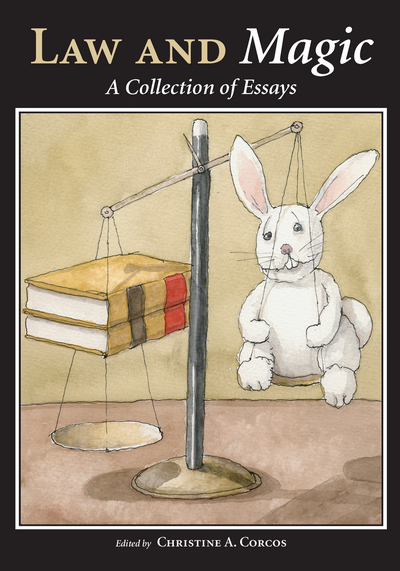 A Collection of Essays

Edited by: Christine A. Corcos

Tags: Magic and the Law

The nearly two dozen studies in this collection explore the very rich ways in which the rule of law and the practice of magic enrich and inform each other. The authors bring both a U.S. and a comparative law perspective while examining areas such as law and religion, criminal law, intellectual property law, the law of evidence, and animal rights. Topics include alchemy in fifteenth-century England, a discussion of how a courtroom is like a magic show, stage hypnotism and the law, Scottish witchcraft trials in the eighteenth century, the question of whether stage magicians can look to intellectual property to protect their rights, tarot card readings and the First Amendment, and an analysis of whether a magician can be qualified as an expert witness under the Federal Rules of Evidence.

"[E]rudite discussions of historical aspects all presented in a readable style. This text is greatly recommended." — Joel Moskowitz, M.D., MagiCurrents

"This fascinating collection explores the unexpected intersections and overlaps of the worlds of law and magic. From the rights of fortune tellers to the wrongs of pulling rabiits out of hats, from the use of magic in courtrooms to the use of intellectual property laws to protect magic secrets, from the illusion of burning your assistant alive to the reality of burning magicians as witches, these essays run the gamut. Eminently readable, thought-provoking, and highly informative, these essays should appeal to magicians, lawyers, or any other practitioner of the art of deception." — Simon Aronson, Author of Try the Impossible and six other books presenting Aronson's original card magic creations; retired partner, Lord Bissell & Brook

"This book contextualizes concepts from intellectual property and copyright law to animal rights and labor laws using the world of magic as backdrop. Discussions of the historical relationship between magic and law show how magic helped shape law's treatment of religion, science, and freedom of information. The chapters on modern law and magic serve as a handbook for magicians and entertainers as well as providing a unique way for students of law to study the concepts of the stage of magic entertainment." — David Hira, David Hira Productions, Co-Producer of "Shows In A Box"

"[F]or those whose lives sit squarely in both legal and conjuring circles, Law and Magic will be worth a look." — Gabe Fajuri, MAGIC Magazine

"[T]he 24 essays in this book are wonderful and full of wonder. They should be required reading…" — GENII Magazine

"[A] fascinating array of commentary that could be related to many shades or avenues of the concept of magic… I do hope Law and Magic will be read by many." — The Amazing Kreskin

"This is an important collection of essays that provides a definitive scholarly source on research into the various interconnections between law and magic. Written with wit and humour, the essays are a fascinating read for legal and non-legal scholars alike." — The Law and Politics Book Review