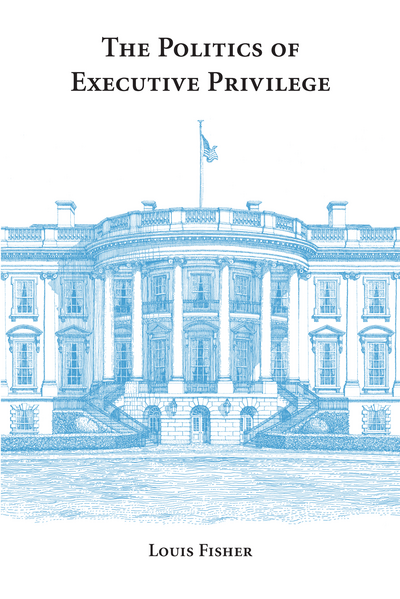 The Politics of Executive Privilege

For over 200 years, Congress and the President have locked horns on an issue that will not, and cannot go away: legislative access to executive branch information. Presidents and their advisers often claim that the sought-for information is covered by the doctrine of executive privilege and other principles that protect confidentiality among presidential advisers. For its part, Congress will articulate persuasive reasons why legislative access is crucial. In terms of constitutional principles, these battles are largely a standoff, and court decisions in this area are interesting but hardly dispositive. What usually breaks the deadlock is a political decision: the determination of lawmakers to use the coercive tools available to them, and political calculations by the executive branch whether a continued standoff risks heavy and intolerable losses for the President.

Many useful and thoughtful standards have been developed to provide guidance for executive-legislative disputes over access to information. Those standards, constructive as they are, are set aside at times to achieve what both branches may decide has higher importance; settling differences and moving on. Legal and constitutional principles, finely-honed as they might be, are often overridden by the politics of the moment and practical considerations. Efforts to discover enduring and enforceable norms in this area invariably fall short.

Efforts to resolve interbranch disputes on purely legal grounds may have to give ground in the face of superior political muscle by a Congress determined to exercise the many coercive tools available to it. By the same token, a Congress that is internally divided or uncertain about its institutional powers, or unwilling to grind it out until the documents are delivered, will lose out in a quest for information. Moreover, both branches are at the mercy of political developments that can come around the corner without warning and tilt the advantage decisively to one side.

It is tempting to see the executive-legislative clashes only as a confrontation between two branches, yielding a winner and a loser. It is more than that. Congressional access represents part of the framers' belief in representative government. When lawmakers are unable (or unwilling) to obtain executive branch information needed for congressional deliberations, the loss extends to the public, democracy, and constitutional government. The system of checks and balances and separation of powers are essential to protect individual rights and liberties.

This book is also available in paper binding.