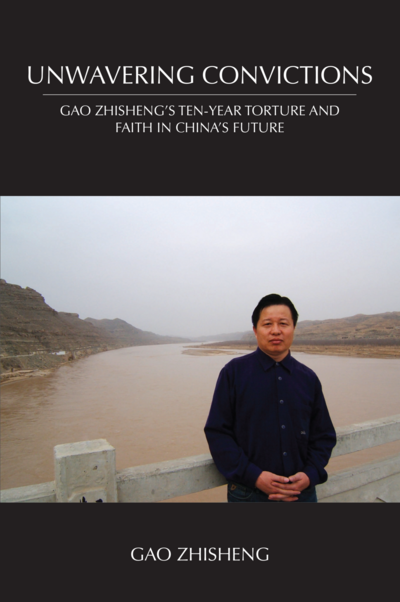 This book is co-published by the ABA Section of International Law and Carolina Academic Press.

Gao Zhisheng was one of Beijing's most successful lawyers. Self-taught and brought up in poverty, he came to prominence through his defense of individuals persecuted by the Chinese government for their religion and practice of Falun Gong and was ultimately detained, tortured, and imprisoned himself by the same regime. The pages are not an easy read, because they detail the regime's attempts to break one of the greatest spirits of our time. Despite this, Gao Zhisheng's unwavering convictions, profound beliefs, and commitment to humanity shine through.

"Unwavering Convictions reads like a contemporary Chinese version of Solzhenitsyn's Gulag Archipelago. Gao Zhisheng is a pioneer for the human rights defense movement in China. As a Christian, he chooses to defend the rights and freedoms for all—from abused Falun Gong practitioners and house church pastors to illegally imprisoned petitioners and free election advocates. For that, he has been treated as the 'No. 1 Political Prisoner' by the Chinese regime, and he and his family have suffered tremendously for nearly a decade. This firsthand account is both gripping and deeply inspiring. It shows how ongoing torture leads to the unraveling of a freedom fighter on the one hand, while on the other hand Gao maintains his victorious, defiant spirit through God's grace. This book is a must-read for anyone who cares about human rights and how China will transition into the future."

— Congressman Frank R. Wolf, who served for 34 years as a member of the U.S. Congress. As the founder and co-chair of the congressional Tom Lantos Human Rights Commission, he adopted lawyer Gao Zhisheng's case. Currently he is Distinguished Senior Fellow of the 21st Century Wilberforce Initiative. The author of the International Religious Freedom Act, Mr. Wolf 's honors include the 2015 Wilson Chair in Religious Freedom at Baylor University and the President's Eleanor Roosevelt Award for Human Rights.

"Like Solzhenitsyn before him, Gao Zhisheng, 'The Conscience of China,' has written an absolutely inspiring and intriguing book about his perspective on life as a dissident in conflict with an oppressive regime. I am proud to be called his fellow brother and fighter for freedom in China."

"I read Mr. Gao's memoir with a heavy heart. As a Chinese who grew up during the Cultural Revolution, I know the darkness of the regime is true. Martin Luther King Jr. once said that darkness cannot drive out darkness; only light can. Dismay is not a solution; only taking action, like Mr. Gao did, is a solution."