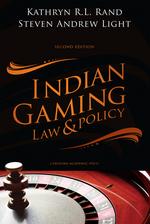 In just over two decades, Indian gaming has become big business throughout the United States. Over 300 tribal casinos in 30 states generate billions of dollars in gambling revenue. The Indian gaming industry continues to grow, attracting widespread attention in the courts, policymaking arenas, and the media. With a complex and controversial federal regulatory scheme and myriad state and tribal regulations, Indian gaming is a growing area of legal and regulatory practice.

At the intersection of federal Indian law and gambling law, and against the background of tribal sovereignty, Indian gaming is a complicated and fascinating topic for students, practitioners, and policymakers alike, raising important legal, political, and public policy questions. Indian Gaming Law and Policy provides a comprehensive and accessible explanation of Indian gaming, tracing the genesis of tribal gaming and the federal Indian Gaming Regulatory Act, enacted on the heels of the Supreme Court's landmark decision in California v. Cabazon Band of Mission Indians. The book discusses in detail the Act's provisions and subsequent legal and political developments, including the scope of gaming and state public policy, the line dividing Class II and Class III games, the increased politicization of tribal gaming after the Supreme Court's examination of the Act in Seminole Tribe v. Florida, and the multitude of actors — at federal, state, and tribal levels, and within both the public and private sectors — who have regulatory authority or other influence over Indian gaming. As debates over tribal gaming heat up across the U.S., the book examines developing political and policy issues that may determine the future of Indian gaming and includes a helpful appendix to guide practitioners and students in researching Indian gaming issues.

Indian Gaming Law and Policy is a one-stop resource for practitioners and policymakers, and also is a highly readable and comprehensive account appropriate for adoption in courses in law, public policy and public administration, and contemporary issues.

"Indian Gaming Law and Policy should be required reading for policymakers at the federal, state, and tribal level." — Bimonthly Review of Law Books