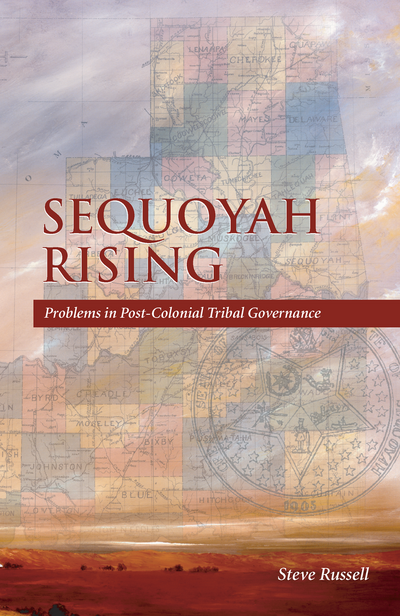 Since 1789, the United States has had an "Indian problem." Since 1492, the Indians have had a colonial problem. It's the same problem.

The two sides of the problem typically relate to each other from their respective defensive crouches, and particularly the Indian side has been too fearful, in this atmosphere, to engage in constructive self-criticism. We demand self-determination while knowing in our private interactions that our tribal governments are not handling the degree of self-determination we have now in a way that satisfies most of the governed.

Sequoyah Rising is the first book to address the democracy deficit in tribal governments directly but from an Indian point of view. Other attempts to deal with the question have typically been by non-Indians intent on portraying tribal governments as bastions of racial privilege and having as their object not reform but destruction.

If democratic theories underlying the US Constitution have American Indian origins, this book argues, Indians should be able to govern themselves in the 21st century in a democratic and transparent manner.

Nothing written here is to absolve the US government from responsibility for the homicides, the thefts, and the broken promises, and much of that ignominious history is recounted. However, the purpose is to help Indian nations do the best they can with what they have, understanding that the most important milestone towards a return to freedom will be an end to dependence.
In the Supreme Court, the rights of Indians have proceeded in the opposite direction from the rights of other minorities, becoming less intellectually coherent and less protective of Indian rights whether asserted individually or collectively. The famous cases that memorialize the victories of the mainstream civil rights movement simply have no analogs in federal Indian law. Therefore, it will probably be necessary at some point to win our freedom the same way the former slaves did, by exhibiting the courage demanded by militant nonviolence.

"A very thought-provoking book . . . well worth the purchase and should be included in any academic library which covers domestic politics, American Indians studies, U.S. government, history or law. Any Tribal library which maintains a high school to adult collection on American Indians should have it, too."
— John Berry, librarian, University of California, Berkeley and San José State University

"[A] specialist discussion of the difficulty of governance and sovereignty in the post-colonial Cherokee nation that by virtue of Russell's breezy conversational style remains extremely readable and even enjoyable throughout."
— European Journal of American Studies

"I read it hoping it would be a mix of work and fun, and it lived up to that, with the sort of fearless tone that makes for interesting reading."
— Ezra Rosser, American University Washington College of Law

"Steve Russell has given us a refreshing and provocative book that covers a lot of ground. It is refreshing in its honest appraisal of some current incarnations of tribal governance, and it is provocative in its combative style and its willingness to discuss the long-term prospects for the survival of American Indian nations...a work of stimulating range and intelligence."—American Indian Quarterly

"Russell's concise and insightful presentation of the course of American Indian policy is exceptional and should immediately be adopted by all who teach courses on Native American history and law. . . . All in all, Sequoyah Rising should be on the bookshelves of everyone interested in American Indian policy, history, and contemporary affairs. It is witty, easy to read, well organized, and, most important, thought provoking. Russell has certainly made his mark as a superb writer, historian, and political commentator."—Wicazo Sa Review

"…an engaging, intriguing book…Sequoyah Rising is a book worth reading with fundamental change in mind." — American Indian Culture and Research Journal