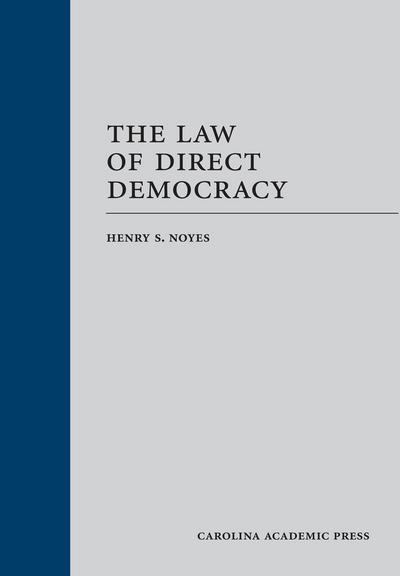 The Law of Direct Democracy

The Law Of Direct Democracy is the first casebook on direct democracy. This book uses state and federal judicial opinions, the text of ballot initiatives, statutes and constitutional provisions to compare and contrast the various state laws that govern the ballot initiative, the referendum and the recall. This book also contemplates the role of interest groups, voters, courts and elected officials and examines their ability to utilize, influence and limit the initiative process. It provides students and instructors both the information they need to learn the law of direct democracy and the tools to pursue further inquiry on discrete topics of interest.

"Henry Noyes' comprehensive and detailed tome The Law of Direct Democracy is a thorough and meticulous study of all the practical issues pertaining to direct democracy. Limited to the US—where roughly half of the states have provisions for direct democracy—Noyes cites and analyses the major court cases and provides extracts to the major documents debating and challenging direct democracy, such as the Federalist Papers. The book gives a sober—and realistic—overview of the pros and cons of having a system that allows the voters to vote directly on laws.

This book is not a polemic and nor does it take sides. It merely presents the facts and the 'law of direct democracy'. This is a valuable book and the sections on the 'recall' especially will provide interesting examples—and ammunition—for those who claim that the recall would lead to political chaos. This book may not become a run-away bestseller, but it is a valuable volume for those who have a scholarly interest in referendums." — Matt Qvortrup, Political Studies Review

"The current volume gathers together many of the 'hot topics' with respect to direct democracy in the United States. It is an eye-opening account (truncated for space reasons) of all the court cases that make up case law for direct democracy.… For those wanting to pursue a political voice that grows louder each year, this volume provides a useful filter to those issues. The summaries of the cases are easy to read and informative…" — Mark Y. Herring, American Reference Books Annual 2015 and ARBAonline